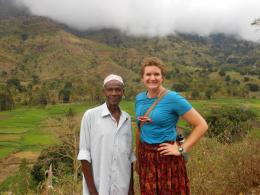 Breaking the rules to make life better in Tanzania

For many students and parents there are simple “rules for college:” you apply to several schools, you weigh your options, you enroll at the school that “fits” you best, you choose a major; you work hard; you learn as much as you can; you graduate; you get a job in your field.

Cornell Environmental Engineering alumna Jen Weidman ’13 started her college selection process by breaking the first rule. She did not apply to several schools. “I only applied to Cornell. I fell in love with the school when I visited, so I applied Early Decision and got in. There was nothing to think about,” says Weidman. “The University is big and has lots of resources, and the College of Engineering within the University is on a smaller scale. And Cornell has Environmental Engineering, which many places do not.”

Weidman says all of this during a conversation that takes place by phone, since she is no longer on campus in Ithaca.  In fact, for much of the past year Weidman has not been in the Western Hemisphere. She has been living in a small village in rural northeastern Tanzania because when Weidman graduated in 2013, she promptly broke the last of the “rules for college” listed above. She did NOT get a job in her field—on purpose.

Instead, Weidman went to work as a Project Coordinator for 2Seeds’ Bombo Majimoto Project in Tanzania. In their own words, the 2Seeds Network “is an incorporated non-profit which serves as an umbrella organization incubating small, efficient, and effective agricultural development projects in Africa. 2Seeds focuses on selecting, training, and mentoring bright and passionate graduates at the beginning of their careers to work with our African partners. In a joint effort, our teams address the issue of food and income security by training rural farmers in agricultural best practices. At every step, 2Seeds encourages our project leaders to embrace independent decision making, enforce financial accountability, and humbly seek a deep and sincere partnership with the local African community.”

“My first year in Tanzania was incredible,” says Weidman. “I came in with some agricultural knowledge and I was able to use my engineering background in some ways. But much of what I did was listen.” Weidman, who was a founder and leader of Cornell’s Engineers Without Borders project team in her senior year, says “everything is all about relationships in Tanzania. 2Seeds comes in with a lot of humility, because we don’t know what the village needs. We count on them to have the ideas.”

As a team leader for Engineers Without Borders, Weidman was part of the inaugural team leaders’ group to pass through Cornell’s new Engineering Leadership Program, led by Erica Dawson and Werner Zorman. “I learned a lot of useful things in the Leadership class,” says Weidman. “One session I think about constantly when I am in Tanzania is a listening session we did with Werner. Turns out, listening is the most important skill there is.”

What Weidman heard when she listened was that the seven farm groups she worked with in Bombo Majimoto knew there had to be a better way to plan their planting and harvesting.  What they needed was a structure where they could put their heads together and make a plan. Weidman helped by fine-tuning, along with her project partners, how their group worked together. “We talked about decision-making in a way that was new to the group,” says Weidman.

“Each of the farm groups sent a representative to a weekly meeting. Together, we analyzed the planting calendar so that we could harvest and sell when vegetables were scarce in other places. We have a river and a water pump, so we can irrigate even in the dry season,” says Weidman. “This first year was very successful. The farms grew watermelon, green peppers, and onions and managed to dramatically increase their return on investment. The farmers divided the profits proportionally and also started something totally new—a group savings fund.”

Weidman’s first year with 2Seeds was so successful that she has signed on for another year. She will be a 2nd Year Project Coordinator/Special Project Fellow with the Lutindi Project, also in Tanzania. “This is such a good experience for me. I have more responsibility than I would have at an entry-level engineering job back in the U.S.,” says Weidman. “We are responsible for setting our own budget and tracking our spending. As a 2nd Year Project Coordinator, I will have the opportunity to take on a personal project. I am thinking about water resources, both in Lutundi and in the other villages. That might mean an engineering analysis of water management systems in place, and proposed new systems, or taking field measurements of water resources in other villages where 2Seeds works.”

In the long run, Weidman thinks she might want to go graduate school. For now, says Weidman, “I am just excited to be able to devote myself full-time to a cause I believe in.”