Cornell NYC Tech has achieved several significant milestones in the past few months, from hiring its first faculty and staff to securing an on-campus patent and trademark office. Here are the highlights, with links to more information. 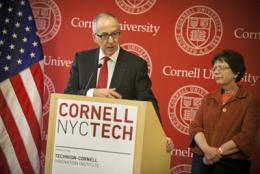 Cornell University and the U.S. Department of Commerce (DOC) announced a groundbreaking partnership in New York City Oct. 2 to speed commercialization of ideas generated at Cornell NYC Tech and across the NY metro area. It is the first time a U.S. government agency has joined forces with a university to give students and researchers direct access to resources to bring ideas -- and the companies and jobs they create -- to market.

"What's thrilling for me is that it's not just the patent and trademark office, and even in a sense not just the Department of Commerce," said Cornell President David Skorton at a news conference announcing the partnership. "This is a conduit for the U.S. government to be working directly with the innovation community. So that we have city government in the City of New York, the federal government, the private sector and academia all working together to figure what's the right place for intellectual property in one of the areas of our economy that is growing like crazy right now."

Mayor Bloomberg, who is serving ex-officio in his official capacity as mayor, Dr. Jacobs and Dr. Schmidt -- will provide advice to tech campus leadership on the educational, research, economic development and community engagement functions of the campus, helping to promote new national and international models connecting academia and industry. The group's focus will include critical elements that will shape the campus and its programs, including topics such as the interface between the campus and New York City, the role of the local and global tech community, the approaches to intellectual property and commercialization of technology, and the creation of partnership strategies.

This first class of full-time students will begin in January 2013 to pursue a one-year Cornell Master of Engineering degree in computer science.. The program will be housed at the campus's temporary location in Chelsea, in space generously donated by Google. In 2017, the campus will move to its permanent home on Roosevelt Island.

Meghan French was named director of external relations for Cornell Tech in New York City. She comes to Cornell from Pace University, where she was assistant vice president for government and community relations.

"We are so pleased to attract Meghan to this critical role. Her demonstrated ability to build successful relationships with multiple constituencies in New York City makes her an ideal fit for the new campus," said Cathy Dove, vice president for the tech campus.

Sharon Marine is VP for development at Cornell NYC Tech

Cornell has named Sharon Marine, associate dean for external relations at the Stanford Graduate School of Business, as vice president for development at the new CornellNYC Tech campus. Marine is leading all fundraising efforts for the pioneering technology campus when she assumes the post Oct. 1.

"Sharon not only appreciates the importance of the entrepreneurial spirit, she also fully embraces the campus's mission to combine global academic leadership with real-world impact, through commercial success and through social good. We are delighted to have her on board," said Dan Huttenlocher, dean of the CornellNYC Tech campus.

Cornell has announced the hiring of Deborah L. Estrin as a professor of computer science and the first professor for CornellNYC Tech, the new tech campus being developed on Roosevelt Island in New York City.

Estrin is the founding director of the Center for Embedded Networked Sensing -- funded by the National Science Foundation -- and a professor of computer science at the University of California-Los Angeles.

She is a pioneer in networked sensing, which uses mobile and wireless systems to collect and analyze real-time data about the physical world. Estrin's work has shown how the data streaming from networks of such devices as smartphones and cameras can enrich our understanding and management of complex problems -- from personal and public health to traffic patterns and civic engagement. She has also shown a commitment to K-12 education, spearheading a groundbreaking internship program for Los Angeles high school students in mobile technologies and data.