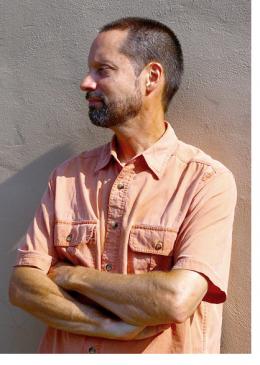 Challenging the status quo to make the world better

John Amos ’85 EAS spent much of his childhood in the hills and gorges of Upstate New York with his father, looking for fossils. Fossils are plentiful in the area, as it used to be the bottom of a shallow sea, but to find them you have to know both where to look and what you are looking for. Otherwise, you just see a lot of rocks. As an adult, Amos has combined this ability to see things other people might miss with a desire to use digital mapping and remote sensing to make the world a better place. His nonprofit organization, SkyTruth, challenges the status quo and enlists ordinary people to help protect the environment.

“I grew up in Rochester, which is a real science-y/engineer-y kind of place,” says Amos.  “My dad was a scientist at heart and a geologist in practice.” Amos learned how to read the surface of the Earth first on those fossils hunts with his father, then as a geological sciences major at Cornell Engineering. “I took Geology 101 just for fun and had such a good time and I remembered how much I loved traipsing through gorges and looking at rocks, so I picked that as a major.”

While getting his bachelor of science degree in geological sciences at Cornell, Amos spent one summer in a work-study job in the School of Civil and Environmental Engineering for a unit known as CLEARS—Cornell Laboratory for Environmental Applications of Remote Sensing. “I sold topographic maps and aerial photographs to people who dropped in and I got really interested in maps and aerial imagery,” says Amos. “Then I found out that there were a couple of courses that were taught in Civil Engineering on remote sensing, image analysis, and image processing and I took both of those classes.”

After graduation, Amos took a job as an environmental consultant in the Washington, D.C. area for a short while, but then returned to school at the University of Wyoming, where he earned a Master’s degree that combined his two loves, satellite imagery and geology.

Amos then spent most of the 1990s working for two Washington-area consulting firms, creating exploration studies and resource assessments. His work was sold to oil, gas, and mining industry clients as well as to government agencies. “I was looking at far-flung parts of the world, using satellite imagery as a tool for gathering basic geologic information,” says Amos. “When I was doing this work in the early nineties, one image from the LANDSAT satellite on a CD-ROM cost $4,400. Nonprofit groups simply could not afford access to these images.”

“As time went on,” continues Amos, “I started realizing what a powerful tool for telling environmental stories satellite imagery is. And at the same time, it became pretty clear to me that global climate change was a serious concern.”  By 1995 Amos found himself in a job that, in his words, “wasn’t really helping.” He realized that what he really wanted to do was to use the technology with which he was so familiar to raise awareness of global environmental issues. “I first thought of something like SkyTruth in 1995, but I didn’t set out to make it happen for another four years,” says Amos.

The power of aerial photography to educate was brought home to Amos, (literally), when he was part of a team that created a poster showing the destruction wrought by the massive 1980 eruption of Mt. Saint Helens. As he examined aerial images of the volcano and the surrounding areas of the Gifford Pinchot National Forest, it became clear to him vast swathes of forest, (far more extensive than those felled by the eruption), had been logged in clear-cutting operations within the national forest.  “I showed my parents the pictures and they were shocked. They said, ‘You mean, they cut down trees in national forests?’ My parents are smart people and they did not know this. So I thought everybody in America should see this—it just tells this tremendous story in a way words cannot,” says Amos.

It took Amos a few years to turn SkyTruth into a reality. “It is hard to leave a job that provides a steady paycheck and health care,” says Amos. “In fact, the cost of covering me and my wife on individual coverage was almost a deal-breaker.” After searching the ranks of nonprofits in the Washington, D.C. area, Amos realized that if he wanted to have the job he was imagining, he was going to have to create it. Using a book called How to Start a Nonprofit, he assembled a board of directors and applied to the IRS for tax-exempt status. SkyTruth was incorporated in 2001.

SkyTruth’s first investor was Angel Braestrup of the Curtis and Edith Munson Foundation. The foundation gave SkyTruth $15,000 as seed money to get its operations established.  “Angel took a leap of faith,” says Amos, and it is still possible to hear the gratitude in his voice, more than ten years later. “Once we had that first grant, slowly we were able to add to that and build a track record.”

Growth for SkyTruth was slow and steady from 2001 until 2010. And then the Deepwater Horizon oil spill happened in the Gulf of Mexico in April, 2010. Using publicly-available satellite photography and some basic scientific knowledge, SkyTruth was able to build a strong case, (later proven true), that oil was flowing into the Gulf at a rate far greater than estimated by industry and government technicians and scientists. Says Amos, “We were able to show that the imagery and the tools exist for people out in the public with some expertise to weigh in on major incidents like this. That oil spill changed everything for us.”

As a result of the attention and respect garnered by SkyTruth’s accuracy in the Deepwater Horizon disaster, Amos was able to attract more funding and hire his first full-time employee in December of 2010. SkyTruth now has five full-time staff and a growing presence in the media. SkyTruth has partnered lately with researchers from Johns Hopkins University in a study of the impacts of hydraulic fracturing and natural gas drilling in Pennsylvania. SkyTruth is enlisting hundreds of volunteers to help sift through thousands of aerial images in order to build a highly accurate map of fracking activity in Pennsylvania.

Now thirteen years old, it looks like John Amos’s unconventional vision for SkyTruth of helping to create a world “where all people can see and understand the environmental consequences of human activity everywhere on Earth, and be motivated to take action to protect it,” just might be taking root. The group’s mantra is “if you can see it, you can change it.” Amos and the organization he founded are teaching people to look carefully and to see differently in an effort to make the world a better place.