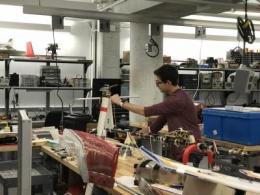 Cornell Engineering’s extensive student project team offerings are not simply a pleasant extracurricular diversion. They are an integral part of the college and provide students with an intensely collaborative experience outside of their regular class schedules. On these teams, students get to break out of the boundaries of the core curriculum and learn what it means to have a production schedule, to adhere to a budget, to raise funds, to design and test and redesign intricate technological equipment, and to lead peers on a project that matters deeply to everyone involved.

Here are just a few of the things Cornell Engineering’s Student Project Team members work on in their free time: Baja-style off road vehicles, concrete canoes, satellites, Mars rovers, steel bridges, autonomous underwater vehicles, and gravity-fed water treatment plants. Upon reading this list, some people will be surprised that undergraduates get to create and control an actual satellite in actual orbit around the actual Earth. Others might focus on the existence of concrete canoes that actually float. But the aspect of that first sentence that most engineers would find surprising is the idea that engineering students have actual free time.

Cornell Engineering is consistently ranked as one of the top ten undergraduate engineering programs in the U.S. As with any top-tier engineering program, the course load is demanding and the work is hard. So the idea that students would go looking for an extracurricular activity that requires all sorts of time, effort, and commitment is a bit shocking. And yet that is exactly what students at Cornell Engineering do. In fact, Mechanical Engineering freshman Kern Sharm ’17 came to Cornell because of the project teams. “I chose to join the Formula SAE team because I want to go into a career in car design,” says Sharm. “The project that Cornell Racing creates every year is astoundingly cool. There are so many different components to the team, so there is always something to improve and learn, and that really appealed to me. It was a major deciding factor in why I came to Cornell."

Joel Heck ’14, a senior in the School of Electrical and Computer Engineering and leader of the CU Air autonomous air system team, illustrates Macdonald’s point: “There are a lot of things you learn on project teams that you can’t learn in class,” says Heck. “I learned how to design power distribution circuit boards from datasheets and tutorials and forums online. I have also learned about communicating with other people on the team, and with people not on the team who are unfamiliar with the project or don’t even have a background in engineering, which requires a different kind of communication.” Heck goes on to say, “Now that I am team lead, I’ve gained experience managing people and projects, which is its own unique challenge and something I never could have done at a job without first being there for a few years.”

The culminating experience for most of the student project teams each year is a competition against project teams from other schools. Ever since Professor Al George of the Sibley School of Mechanical and Aerospace Engineering became advisor to the Formula SAE Racing Team in 1986, Cornell’s project teams have had a remarkable record of success. In the spring of 2013 alone, the Baja SAE racing team, the CUAir unmanned air system, and the CU Underwater Autonomous Vehicle team all took first in their competitions against teams from all over the U.S. and the world. The AquaClara team won the Environmental Protection Agency’s People, Prosperity, and the Planet Award for an innovative water filtration process they devised. And the CUSat team had their satellite launched into orbit by SpaceX.

Students on this year’s teams will travel as far afield as Alaska, Honduras, and Bolivia. Ithaca will have the honor of hosting the regional Concrete Canoe and Steel Bridge competitions in April.

Senior mechanical engineering major Georgia Crowther ’14 is team leader of the Cornell Mars Rover student project team. Crowther is a firm believer in the value of learning outside of the classroom. “I think being on a team like a project team is critical to engineering education. You don’t really know what you have learned in a class until you have to implement it in an independent environment. Project teams help you develop problem-solving skills that classes simply can’t test you on. For an engineer, it’s critical to keep in mind that everything is connected.”