In the Star Trek franchise, the go-to diagnostic tool for doctors is the tricorder. This futuristic device can rapidly diagnose a variety of medical conditions without so much as the need for a blood sample.

The tricorder does not, of course, exist in the real world. But science fiction has a strange way of both predicting real scientific advances and of spurring innovation. In fact, there’s an X Prize competition to design a tricorder that can detect anemia, pneumonia and urinary tract infections, among multiple other conditions.

While David Erickson, a professor at the Sibley School of Mechanical and Aerospace Engineering, and Saurabh Mehta, an associate professor of global health, epidemiology and nutrition at Cornell’s Division of Nutritional Sciences in the College of Human Ecology, aren’t striving to win that prize, they are also building something that can quickly and efficiently reveal medically-relevant data. The NutriPhone, with just a small finger-prick of blood, can reliably detect levels of vitamins A and B12 in the bloodstream, and the device may soon have the ability to diagnose vitamin D and iron deficiencies. 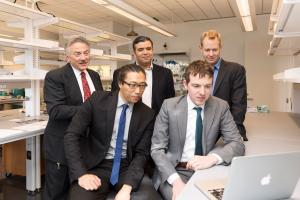 Mehta and Erickson teamed up about five years ago when they realized that most medical technological advances “usually widen the health gap between the poor and the rich,” says Mehta. This is true both in the United States and internationally, he says, resulting in a disparity: if you can afford it, you get access to better, fancier equipment; if you can’t, then you usually end up with sub-par or outdated technology. Their collaborative work led them to form the Institute for Nutritional Sciences, Global Health, and Technology—or INSiGHT—last year. What they want to find out is, says Mehta: “Can we apply advances in modern technology to solve problems that can bridge these health divides?”

INSiGHT also has several other public health endeavors under development, including a tool similar to the NutriPhone that could quickly diagnose diseases including dengue and malaria. “The idea behind INSiGHT,” says Erickson, “is that it’s a center by which we can bring together people interested in global health and nutrition... with engineers who have both the skills and the interest to solve those problems.”

Erickson and Mehta want to take advantage of the ubiquity and familiarity of smartphones. Erickson envisions someone switching seamlessly from their Facebook app to their vitamin D app. “People are extremely comfortable in the smartphone ecosystem,” says Erickson. He and his colleagues hope to take advantage of that comfort to maximize use of the NutriPhone.

Currently, there are working NutriPhone prototypes being produced by a company, VitaScan, which is run by Li Jiang Ph.D. ‘14 and Dakota O’Dell Ph.D. ‘16, former students of Erickson’s (Erickson and Mehta are both founding members and on the board of directors of VitaScan). The company is currently housed at the McGovern Center at Cornell, an incubator for biotechnology companies, and recently received a nearly $75,000 grant from the non-profit FuzeHub. The grant will be used to develop a manufacturing and packaging process in preparation for commercialization of the device.

The prototype—now dubbed the VitaScan in preparation for its entry into the commercial market—is a small white box with a slot in the front. This is where the small blood sample, absorbed onto a test strip, would be inserted. The test strip works by first filtering out blood cells, letting the micronutrient- containing plasma pass to the next stage. The vitamin or mineral in question—let’s take iron, stored as ferritin in the body, as an example—first binds with specific antibodies, which are also part of the test strip. Those antibodies are also attached to gold nanoparticles. The combined ferritin-antibody- gold complex then flows across one of two lines. The first is a line of antibodies that also bind to ferritin. Gold nanoparticles show up as pink, so the darker pink this first line is, the higher the concentration of ferritin in the sample. The second test line binds to all remaining antibodies that didn’t bind to ferritin. If there are a lot of these unbound antibodies left over after passing the first test line, then this second line would be relatively dark compared to the first line, meaning that iron concentrations are low. If, however, the person has good iron levels, there will be relatively few antibodies left unattached to ferritin, and this second line will be lighter compared with the first one.

This type of lateral flow test strip is not new, but there have been challenges in using them to get the kind of exact, quantitative results necessary for measuring micronutrients whose normal range may be measured in mere picograms per milliliter, as is the case for vitamin B12. And there are other challenges as well: despite their grouping as “vitamins,” each different letter and sometimes number (A, B6, B12, C, D, etc.) actually represents an entirely different compound, each of which needs its own techniques for sample processing and quantification.

Sasank Vemulapati, a Ph.D. student in Erickson’s lab, is working on an especially tricky one: vitamin D. Not only is it fat-soluble (most of the others are water-soluble), but in the bloodstream, it’s not alone. Rather, it’s bound to a large protein that helps it travel around, says Vemulapati. “It’s a huge molecule that sort of envelops vitamin D,” he says. The bond between vitamin D and the large protein has to be unlocked before the vitamin D levels can actually be measured. “A big part of my struggle was finding the right sort of reagents that would work in a short amount of time,” he says. They also would have to work in small amounts so as not to dilute the sample. Eventually, he hit on a combination of organic solvents and low pH buffers last year and he’s been working to perfect the process since then. The first small trial in Ithaca was not very successful, Vemulapati says, but by round two they had ironed out some of the wrinkles.

They decided to compare their test strips with the gold standard: tandem mass spectrometry. This kind of testing takes over a day to complete, involving multiple trained experts, and is incredibly expensive—the exact opposite of what those at INSiGHT are trying to achieve. They teamed up with Professor Marie Caudilla’s nutritional sciences lab on campus to run the tests. “The results from the NutriPhone, when compared to the results from mass spectrometry, were remarkably accurate,” Mehta says. It was “a pretty big revelation,” adds Vemulapati.

Cheap, quick and easy vitamin D testing may benefit a large number of Americans. By some estimates, 40 percent of people in the U.S. are vitamin D deficient. The micronutrient is important for calcium absorption, helping prevent osteoporosis in older adults. It also has several other roles in cell growth and immune function. And a recent study suggests that vitamin D may help prevent respiratory tract infections.

While the NutriPhone is closest to full implementation, INSiGHT has several other projects on the docket. The FeverPhone, built on a similar platform to that of the NutriPhone, aims to be able to diagnose six different diseases in the field: dengue, malaria, chikungunya, typhoid fever, leptospirosis and Chagas’ disease. These febrile diseases are some of the most common worldwide, but they don’t always attract the most funding dollars. And they’re especially common in parts of the world with limited access to hospitals and diagnostic labs. One problem, says Mehta, is that if you have a fever and you’re in a certain part of the world, “often the diagnosis is presumptive. So if you were in Latin America, for example, and somebody presented with fever, then the easy thing would be, ‘Let’s assume it’s dengue.’” In East Africa, however, the assumption would be malaria; in India, it might be typhoid. But these assumptions aren’t always correct, leading to incorrect and ineffective treatments. Mehta says he and Erickson wanted to pick diseases that are not only common, but for which “it really makes a critical difference for the physician or the healthcare provider to know, early on, what this is so that they can tailor the medication.” Last year, Erickson and Mehta received a grant from the National Institutes of Health for $2.3 million to continue working on and developing the FeverPhone.

Outside of the FeverPhone, Erickson is also working on another interdisciplinary project—this one with researchers at Weill Cornell Medicine—on a system to quickly diagnose Kaposi’s sarcoma, a type of cancer often associated with HIV infections, and which is extremely common in sub-Saharan Africa. The solar-powered device can detect the cancer in about half an hour. The National Institutes of Health awarded the project a $1 million grant last year to support that device’s development. 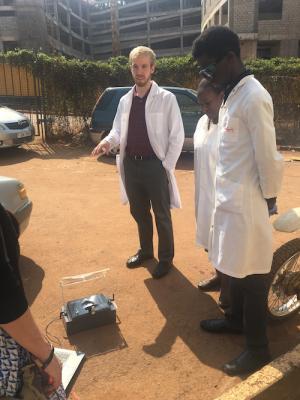 Mehta says that being at Cornell is a big reason why the collaborations that underpin INSiGHT’s projects are successful. Compared with institutions where Mehta worked before coming to Cornell, Mehta says, the collaborations here just happen organically. “I’m a big believer,” adds Erickson, in these sorts of collaborations, which are “the way a lot of real-world problems are solved.”

“There is a lot of interdisciplinary work that happens at Cornell,” Mehta says, including radical collaborations like that between him and Erickson. Down the line, he hopes that INSiGHT will foster more such partnerships. “We want to get all the bright minds at Cornell under an umbrella and provide the spark.