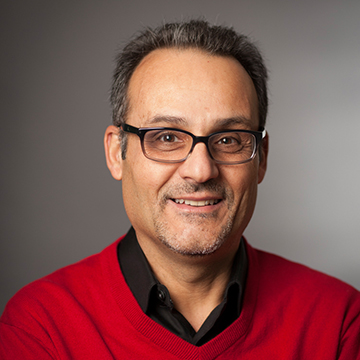 Nanoscale Materials for Energy and Sustainability The prosperity and wealth of any nation significantly depend on its energy resources. Making good investments in energy production and its uses will become even more critical in the future as the population grows, the economy expands and demands for sustainability intensify. In recent years "storm clouds" have been forming at the interface of energy resources, environment, and climate change that demand concerted action by scientists, engineers, and policy makers. Materials innovation can provide unique technological opportunities for addressing some of these challenges. Research efforts in our group have focused on the following four current sectors:

Carbon Capture and Conversion Rising levels of atmospheric CO2 due to increasing consumption of fossil fuels have been widely implicated in global climate change. Post-combustion carbon capture by retrofitting the existing energy infrastructure provides a viable near-term solution to reduce CO2 emissions. While some progress has been made in developing materials for capture, processes to store safely CO2 are still a major challenge. In fact, a more preferable method involves conversion of CO2 into chemicals. The advantage of such a process is that one can simultaneously reduce the CO2 levels in the atmosphere and also provide value-added chemicals from sustainable sources using green processes.

Membranes for Gas Separation and Water Purification Mixed matrix membranes (MMM) combining the advantages of both polymers and inorganic materials have become the focus of next generation gas separation membranes. However, issues associated with the poor interaction between the particles and the polymer can lead to particle aggregation and the presence of nonselective voids both of which compromise the performance of the membrane. Our efforts have focused on new gas separation membranes onto which a thin layer of porous (MOF, ZIF and zeolite) or non-porous nanoparticles has been immobilized.

A similar immobilization approach is being used to develop patterned surfaces with well-defined hydrophobic/hydrophilic features. Such systems have been proposed for practical, water harvesting systems in countries, which suffer from negligible rainfalls but experience desert fogs. The approach leverages our on-going work to develop non-fouling water membranes by tailoring the membrane surface characteristics via nanoparticle deposition. By properly selecting the nanoparticle and the polymeric membranes robust and scalable systems that do not affect the transport properties of the membrane have been developed.

Energy Storage: Batteries and Supercapacitors Efficient energy storage remains a critical need for developing renewable energy systems. In addition to storing electrical energy from renewable sources and, thus, solving the intermittency problem associated with them, batteries are key components in various portable electronic devices and in hybrid electric vehicles. Research efforts in batteries have focused on both the electrodes as well as the electrolyte. Electrolytes play a critical role for the battery's efficient and safe performance and need to meet a range of specific requirements. Solvent-free electrolytes with low flammability and toxicity are of great interest to avoid any potential fire hazards. In parallel, several issues with the present cathode materials have led to a search of new systems. Lithium-sulfur is one such system that has theoretical specific capacity and specific energy, which are almost an order of magnitude higher than the current lithium-ion batteries. Sulfur is also non-toxic, highly abundant and cheap. Yet, there are many problems associated with this system, primarily, lower than theoretical specific capacities and poor cycle life.

Oil and Gas Exploration and Production Development and deployment of new, reliable and practical tracers to illuminate an oil reservoir can help delineate waterflood fronts, identify bypassed oil, and map super permeability zones. The capabilities become limitless with the possibility of developing agents that, in addition to illuminating the reservoir, they provide the means to intervene to recover oil or rectify adverse transport conditions. Nanoparticles are small enough to fit through the smallest pores (~50 nm) in the reservoir but much larger than molecular tracers and, therefore, recoverable. Nanoparticle tracers can, thus, yield information much faster because of differences in diffusion and flow behavior. Research in our group has been focusing on the use of nanoparticle tracers that can survive the aggressive high temperature/high salinity environment of the reservoir for batch and real-time sensing as well as modeling of nanoparticle flow in nanoporous media.