From the School of Electrical and Computer Engineering’s third floor Rhodes Hall conference room, it’s hard not to notice something new—and rather alien—on the horizon. Juxtaposed by the expansive green of Hoy Field in the foreground and the imposing Gothic presence of Barton Hall behind, Bill and Melinda Gates Hall—the soon-to-be new home of The Faculty of Computing and Information Science—sits expectantly at the corner of Hoy and Campus Roads. With its decidedly information age steel and glass exterior sparkling in the spring sunshine, punctuated by hundreds of delicate wing-like stainless steel panels, the structure looks rather like one of those highly-anticipated 17-year cicadas that has risen out of the ground and is preparing to take flight. Seven years in the making, Gates Hall is indeed highly anticipated by the faculty, staff, and students who will begin moving into the $60 million, 100,000-square-foot, state-of-the-art building in a matter of months. The new facility, scheduled for completion in December, will unite two departments, Computer Science and Information Science—which currently occupies space off-campus at 301 College Avenue—for the first time, enhancing the already significant collaboration between the two complementary departments.

Information Science, a relatively new department at Cornell with highly successful and fast-growing undergraduate and master’s programs has perhaps the most to gain from the move. Prof. Jeffrey Hancock, co-chair of information science, noted the importance of being “part of the CIS community all under one roof,” as essential to an evolving department like his. “The design of the space will facilitate our sense of community,” he said.

Holly Domke ’14, in the Information Science, Systems and Technology (ISST) program in the College of Engineering, said she is “thrilled” about the new building and what it will mean for her program. “It will give information science more legitimacy on campus with our own space,” she said.

Prof. Joseph Halpern, chair of computer science, agrees that proximity between his department—which will celebrate its 50th anniversary in 2015—and information science is essential to fostering future collaboration.

“There has been an information revolution: the world has changed from a place where information was difficult to find…to one where information is plentiful, hard to ignore, close at hand, and collected by all of us, but hard to make sense of. Computer science and information science are leading this revolution at Cornell.  Having them both in one building will promote collaboration and interaction between the departments, and will doubtless lead to further breakthroughs.” he said.

Bursting at the Seams

The programmatic need for the new CIS facility has become ever more pressing since a successful proposal to the Bill and Melinda Gates Foundation in 2005 resulted in a $25-million grant to Cornell for the construction of a modern facility that would help advance education and research in computing and further enhance Cornell’s reputation in the field of computer science—already recognized as one of the top five programs in the nation.

Computer science—a field of study that is in increasing demand across the country—is growing at Cornell too and its foundational courses are, according to computer science chair Halpern, “bursting at the seams,” a testament to the increasing relevance of computing to many different disciplines. The department, which currently occupies most of the top three floors of Upson Hall “is in dire need of new space for both academic programs and for attracting and retaining faculty” said Halpern.

Domke says she “can’t wait to see how the [information science] department grows and thrives” in the new building. “The Gates building will allow for even more student collaboration and strengthened faculty relations, bringing the positive and engaging environment of 301 College Ave. onto campus where it will be even more accessible,” she noted.

While shared space is an important focus for Gates Hall, more than one-third of the building will be research and teaching labs, including specialized labs for human-computer interaction, robotics, computational sustainability, systems and networking, graphics and computer vision, as well as space for the Center for the Interface of Networks, Computation and Economics, a new multi-disciplinary center that examines social networks and how they interact with, transform and are transformed by computing systems.

“The move will allow us to enhance our research along many dimensions,” said Hancock, “including new labs for our faculty and graduate students, specialized space for developing devices, and more options for integrating our undergraduates and Master of Professional Studies (MPS) students into research.”

Interactions between research teams will also be enhanced, say faculty. “We are very excited about our new lab and the opportunity to be close to information science,” said Kavita Bala, an associate professor of computer science and a member of the graphics and computer vision research group. “There is overlap with human-computer interaction and it will be great to be housed in a common building,” she noted.

The impact of Gates Hall goes well beyond CIS and its computer science and information science departments, however. Space vacated by CIS in Upson and Rhodes Halls will return to the College of Engineering in support of the college’s facilities master plan which includes a full renovation of Upson Hall to provide much needed space for research and instructional labs, student team space, classrooms, and offices, according to facilities director Bill Bader. The college plans to completely upgrade Upson Hall, which connects Duffield, Phillips, Grumman and Rhodes Halls, to current standards, including a refreshed exterior so that it will last another 50 years.

A Building with a Mission

Bill and Melinda Gates Hall isn’t just about extra space; it’s also about a relatively young program—a decade old college-level interdisciplinary unit charged with integrating computing into every discipline across campus—coming into its own.  As a new model—a faculty-oriented around a core educational and research mission, rather than a traditional college—CIS’ impact has often been overlooked on campus.

That all changed with Cornell Tech in New York City, an initiative CIS and its then-dean, Daniel Huttenlocher, co-led along with the College of Engineering and its dean, Lance Collins, and Provost Kent Fuchs. Huttenlocher has since been named vice provost and founding dean of Cornell Tech.  The two initiatives share similar DNA and this is reflected, not only in their interdisciplinary missions, but also in the choice of architect.

New York and Los Angeles-based architecture firm Morphosis was chosen to design Bill and Melinda Gates Hall in 2010. Morphosis founder and design director Thom Mayne, winner of the 2005 Pritzker Prize in architecture, is lead architect. The firm was later selected to design the first academic building for the Cornell Tech campus on Roosevelt Island.

Known for its blending of design and technology, “Morphosis has a reputation for high-level innovation that goes well beyond conventional thinking about the built environment,” University Architect Gilbert Delgado told the Cornell Chronicle at the time of the firm’s selection. Delgado said he believed that Morphosis would create something that would “expand our preconceptions of our campus.”

What has resulted is a building that “strives to capture and express the dynamic and transformative power of the discipline it houses,” according to Morphosis. The building design itself was achieved through advanced computational modeling and CAD tools that are a “direct testament to the value of computing in the arts and sciences.”

The architectural features—both inside and outside—were purposefully designed to foster collaboration among faculty, students, and staff. Communal and collaborative spaces are organized around an open atrium space encompassing four levels, and a covered entry plaza provides a space for social interaction outside. Project labs and breakout rooms are designed as flexible multi-purpose spaces that are visually connected through glass walls.

Sustainability is also an important goal for Bill and Melinda Gates Hall. With the expectation of earning a LEED Gold certification, the new building will be green in every possible way. Daylight harvesting and sensors will be used to increase the use of natural daylight; radiant flooring, active and passive chilled beams and an energy recovery unit with CFC- and HCFC-free refrigerant will increase the efficiency of heating and cooling; and energy efficient fixtures and controls will reduce water use by up to 20 percent. Outside, native landscaping will reduce the need for site irrigation and permeable pavement will improve storm water management. 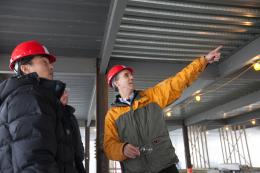 The Bill and Melinda Gates Foundation “became interested in Cornell’s CIS program when Microsoft co-founder Bill Gates visited campus in 2004 at the invitation of then-President Jeffrey C. Lehman,” according to the Cornell Chronicle. The grant was a huge win for founding CIS dean, Robert Constable, a former chair of computer science who took the helm when CIS was founded in 2002.

Four years after the initial $25-million gift, and up against a Gates Foundation-imposed deadline for building design and construction planning, then-dean Daniel Huttenlocher embarked on a whirlwind $15-million development effort that kept him on the road for much of 2010, but that also stirred intense interest among Cornell alumni, parents, and friends—including many who had never given to Cornell before—in the CIS mission and its growing importance to undergraduate education across the university.

What resonated with the 40 or so donors who supported Gates Hall were not the architectural plans or the fancy proposals, but the CIS story and the opportunity to be at the vanguard of a new educational model, one that seeks to harness the power and possibilities of our increasingly information-driven society.

On a bright Ithaca spring day, as the sun moves across the modern shape-shifting exterior of Bill and Melinda Gates Hall, it’s easy to see how the building evokes the essence of a discipline that is hard to characterize, yet affects our daily lives in so many ways—both known and unknown.

As outgoing dean Daniel Huttenlocher passes the baton to a new dean, the future is indeed bright for CIS. Incoming dean Haym Hirsh, who has left his position as Chair of Computer Science at Rutgers University to take the helm at CIS, believes that the organization’s future is intrinsically intertwined with Gates Hall.

Hirsh, who said he was attracted to the opportunity because of CIS’s “excellence and future opportunities,” pointed out neither would be possible without the room to grow and innovate that Gates Hall will provide. “The pace of change in computing is so rapid that some cutting-edge research and timely academic offerings can’t happen without rethinking the physical environment in which CIS activities take place,” said Hirsh. Gates Hall “addresses a bottleneck that would have kept CIS from living up to its potential.”