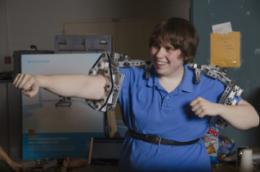 You are about to leave your office for home. With a couple last keystrokes on your

Embedded systems make it all happen. Devices containing microprocessors that monitor information and react to it are already prevalent in our lives: it’s what makes your smart phone “smart,” and it’s what allows more and more consumer electronics to communicate with other devices. The rapid growth of such devices is creating an “Internet of Things” expected to include more than 15 billion devices within the next four years.computer, you turn up the thermostat inside your house and turn on the oven. Driving home, you pass through an “intelligent” intersection where the traffic light automatically changes as it senses your car approaching. It begins to rain, and without your noticing it, your car reacts by adjusting the power to your wheels.

With an eye toward this technology’s growing importance, Intel Corporation and Cornell’s Systems Engineering Program are launching a new competition that will challenge college students across the country to invent the next generation of embedded systems.

May 4–5, the Cornell Cup USA Presented by Intel finals are slated to kick off at Walt Disney World’s Contemporary Resort in Lake Buena Vista, Fla., with 24 teams from 19 American colleges and universities competing. Equipped with donated Intel Atom boards, Tektronix test equipment, MathWorks software, and $2,500 in development and travel funds, the teams will present a wide array of inventions: solar-powered unmanned aircraft, belts that allow the visually impaired to detect obstacles, home energy control systems, and robots that pick up stray tennis balls. The top three entries will be awarded prizes of $10,000, $5,000, and $2,500.

The competition grew out of the success of an Intel Cup embedded technology competition in China—which now includes over 26,000 students—and one started more recently in India. The company that introduced the world’s first microprocessor asked Cornell systems engineering lecturer David Schneider M.S. ’06 ME, Ph.D. ’07, how he would create a U.S. competition. Schneider was given just a month to craft his proposal. Intel approved it last spring and work began on a competition that would give a new generation of innovators the chance to showcase their own “world’s first.”
“We know and we’ve seen through the participants that these hands-on projects give students a very rich learning environment,” says Kimberly Sills, Intel university relations manager. “They get to do everything they’ve been working on in their classes. They get to test it and put it together and see if it works.”

Schneider says one of the aspects that makes this competition unique is its attention to what he calls professional design: defining the challenge you’re trying to solve, how your solution meets that challenge’s needs, and how to measure how well your solution has met its goals. Add in a bit of risk management and planning, some objective decision justification, and attention to communicating your ideas effectively, and you have many of the skills that are targeted by this competition, but that industry says are often lacking in college graduates from even the nation’s top colleges. “So we wanted to try to provide this very exciting and very empowering experience that would bring these skills to the forefront.” Schneider says, “And at the same time, allow the students to express their creativity.”

“From an engineering and educational perspective, they’ve broken ground in this competition on the types of things that students can do,” says Professor Linda Nozick, director of Cornell’s Systems Engineering Program. “This one I believe is unique because of the flexibility on the kinds of entries and allowing a lot of creativity on the part of students.”

The competition is open to any invention using an embedded system. Teams can consist of three to five undergraduate or master’s degree students. By October, teams from schools including the University of California at Berkeley, MIT, and Purdue had submitted a diverse range of ideas. The finalists’ concepts can now be found at www.systemseng.cornell.edu/intel.

Besides Intel, the competition has attracted support from other companies, including Tektronix, a Beaverton, Ore.-based company that makes testing and measuring equipment, and MathWorks, a Natick, Mass.-based company that develops mathematical computing software. As the competition approaches, Cornell expects other companies to also become sponsors. “If what happened with the Intel China Cup is any example, we expect that this new competition will bring in sponsors of all sorts,” says Abby Westervelt, Cornell Engineering’s director of Corporate and Foundation Relations.

Having Cornell create and develop the competition presented a quandary to Schneider. If Cornell sponsored a team and won the competition in its inaugural year, participants might question the fairness of the competition. So Schneider decided that his robotics lab of more than 30 students would instead showcase two innovative robotic systems they have developed with the additional assistance of electrical and computer engineering senior lecturer Bruce Land and mechanical and aerospace engineering assistant professor Brandon Hencey.

“It’s one thing to win the competition—that’s great and exciting,” Schneider says. “But in a lot of ways, that’s kind of a flash in a pan. Getting to construct the competition and continue to bring it to life and grow it, I would say is an even higher honor.”

The Cornell robotics team’s first showcase project is a modular robotic platform developed for other schools to use as the basis of their own embedded systems projects. As a modular system, the 12-inch-by-12-inch silver and gray robot’s wheels, motors, sensors, and even supporting software have all been designed to be replaced, added to, or otherwise modified via well-documented “plug’n’play” interfaces. Schneider says this flexibility is empowering. “It will aid students in learning the basics while providing a robust framework to build their own unique aspects,” he said, estimating that at least half of the competing teams’ entries would have benefited from this modular platform, and he hopes that future entries will be even more amazing as a result of it.

“The fact that we’re delivering a complete starter system for other teams is really important,” says Jim Kehoe ’12 ME, a mechanical engineering team leader for the robot. “To create just the core system in a robotic platform takes a lot of time and effort. And to be able to have the time to create additional functionality on top of that, most teams wouldn’t be able to fully accomplish that over the course of just one year, which is the time frame for the competition.”

Besides the modular platform, the Cornell team has another project to exhibit at the competition at Disney World: a three-member robotic rock band. With a guitar, drum, and bass, the human-size robots, running on an Intel Atom board, will perform RockBand and Guitar Hero video game songs on an XBox as background music to welcome each speaker on stage. “Just like Saturday Night Live has a band, this is our band for the competition,” Schneider says.

Beyond learning how to create an embedded technology project, the students say preparing for the competition has given them valuable skills that will help them in the job market. “Working with a team that has 11 people in our subgroup and 30 people overall, you really have to learn just how to do project management and work in groups and teams and learn how to motivate people,” says Chad Meis M.Eng. ’12 EE, an electrical engineering team leader. “I think it’s pushed all of us in a lot of different ways, not necessarily just engineering.”

As an undergraduate engineering student at Cornell, Kehoe says design was not a focus of the curriculum, since most of the courses are based on textbooks, problem sets, and exams. Yet while working on the modular platform, Kehoe also helped with a range of tasks, including monitoring the budget, working with vendors, and controlling costs, all while justifying the team’s decisions to better help them obtain their technical goals.

“It’s a really powerful experience in terms of just managing the product,” Kehoe says. “We’re giving the plans up to other teams and this needs to be as cost effective as possible. So it’s given the students on this team a great perspective on how to keep costs in mind and overall just how to execute a successful engineering project. It’s really an experience on a scale that you just don’t get in the undergraduate curriculum.”