From project team to career dream

Like most colleges and universities, Cornell has competitive teams that require tryouts, selecting only the top talent to compete. Success on these teams can often lead to lucrative, fulfilling careers after graduation. But unlike most schools, these are not sports teams: they’re the project teams within Cornell Engineering. Spanning projects from building fuel cell-powered cars to canoes made of concrete, project teams require dedication, commitment and late nights, but give back by offering students real-world experience in solving problems where variables can’t be conveniently ignored like they can on an exam. Here are three profiles of recent Cornell Engineering graduates who took their project team experiences with them into the start of their new careers. 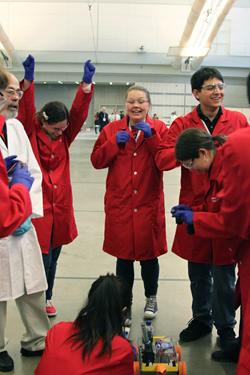 “It was one of the most incredible days of my life,” says Brianna DeRooy. That was the day her junior year when she and the rest of the ChemE Car team won the national competition in Pittsburgh. The ChemE Car competition, run by the American Institute of Chemical Engineers, requires teams to create a car that is powered by some chemical energy source—including fuel cells, battery, or pressure—and have it travel, under its own power, a certain distance, stopping on its own as close as possible to a line drawn on the floor.

In 2012, Cornell’s team brought along its battery-powered car. Named Zapdos, it was outfitted with an orange beak and eyes made of construction paper. After the first of two rounds, Zapdos was already in first place, having stopped just six inches shy of the target line. But the second round cemented their success: the car stopped with its front wheels literally touching the line. The ChemE Car team cheered, jumping and hugging each other in their distinctive Cornell Red lab coats.

DeRooy, who graduated in 2014, now works for Procter & Gamble, working in their research and development team on material development for their Gillette and Venus product lines. While the specific science of what she does is quite different from her work on the ChemE car, DeRooy says, she uses “the implicit skills that you learn while you’re on a project team. You learn how to work with a team of people with different backgrounds.” On the ChemE Car project team, there were mechanical, electrical, and computer engineers as well as chemical engineers. “That’s the same in industry,” says DeRooy. “We all come from different backgrounds, different schools, different ages, different life stages, but we still have to, at the end of the day, put out a product.”

At Procter & Gamble, DeRooy has been helping to push for connecting project team members with recruiters for the company. She thinks it gives applicants an edge to have been on a project team.

DeRooy regards her ChemE Car experience as “one of the most influential things I was able to do on campus,” she says. “It is an experience that is beneficial to students if they’re considering a career in industry.” Being on a project team, DeRooy says, taught her things that she couldn’t have gotten simply through reading books or doing homework. 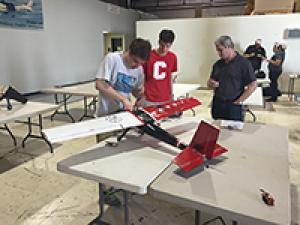 When Eric Fiegel first came to Cornell, he thought that project teams sounded interesting. In particular, he liked airplanes and aerospace, so he applied to be on the Design/Build/Fly team, or DBF, which designs and builds a small aircraft from scratch every year, culminating in an international competition. But he didn’t make the cut.

“I didn’t know they were so competitive,” he admits, and realized that he hadn’t prepared for the application process sufficiently. He made the team his sophomore year, though, once he had a better sense of what was required. That year, he worked on the propulsion of the plane; his junior year, he rose to head the propulsion team, and his senior year he was one of the two overall DBF leads.

Now, Fiegel works at Boeing, where he also interned the summer before his senior year. After working on the propulsion team of DBF, he got to work on propulsion development at Boeing. He no longer works on airplanes, instead working with Boeing’s satellite systems, but nevertheless, he says, “the skills are really transferrable.” For example, he works with computer-assisted design, or CAD, tools, to model different parts, which he also used on DBF. And, as other project team alumni have mentioned, the soft skills of working within a team have also served him well so far.

As illustrated by his experience in his first year, DBF (and the other project teams at Cornell) are quite competitive.

“I have never heard of another school where you could have 100 people apply and only let five people onto your team,” Fiegel says. He’s not sure whether Cornell students overall are more competitive and have more of a drive to be on a team like that, but that selectiveness may help account for the success of Cornell project teams: even when they don’t win, they tend to do quite well. (DBF came in 8th out of 80 teams Fiegel’s junior year, and 13th out of 95 teams his senior year). 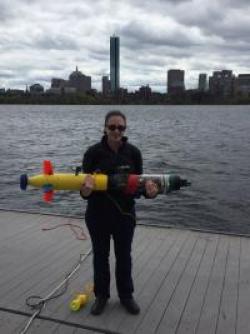 Erin Fischell knows that there are other schools that also run project teams like those at Cornell. But, she says, “I think Cornell does it better than anybody else.” Often, she explains, students often have to hunt for funding, or work on the pet project of a professor who has funding. And there’s often a faculty member who’s directly involved with the project. At Cornell, however, students run the show themselves.

“I think it’s a brilliant model,” Fischell says. “I’d pick a Cornell project team kid against anybody else going into the job market or into academia.”

At Cornell, Fischell worked on the Cornell University Autonomous Underwater Vehicle, or CUAUV. When she applied to the team, she said on a panel at an entrepreneurship conference at Cornell earlier this year, “I didn’t know at the time that this was going to be the most important part of my undergrad experience.” CUAUV was important because it led her to a career of working on underwater robotics—she’s now a scientist at the Woods Hole Oceanographic Institute working on improving the data collection and control of autonomous underwater vehicles.

And CUAUV was also important for her personal life as well: “The guy next to me in a bunch of these freshman year photos—he’s now my husband,” she added, to laughter.

Fischell especially valued the chance that Cornell provides for students “to be engineers, not just to learn engineering,” she said at the panel. And just like in the real world, she said, whatever they build “has to work every single time under adverse conditions, not just once when the T.A. is looking.”

When it comes to autonomous vehicles in the world’s oceans, a single error can mean the permanent loss of an incredibly expensive instrument. And Fischell understands that failure is never fun. During her time on the CUAUV team, she remembers, “each of those failures seemed so shattering at the time.” But looking back from her current position, she’s grateful: “What a great gift, that space to fail is, where your job’s not on the line! You have time with which to learn those hard lessons.”

Like DeRooy, Fischell thinks that working on a project team is a great way to get hired, in addition to making graduates better at their jobs once they have them. When she or other CUAUV alumni interview people now, she said, it’s immediately clear whether the person they’re interviewing was on a project team. Not only can they relate anecdotes of solving specific problems, Fischell said, but people who have worked on a project team “know how to design things that can actually be built.” They also don’t require a lot of oversight or handholding: “Autonomy is one of the things we learn,” she added.